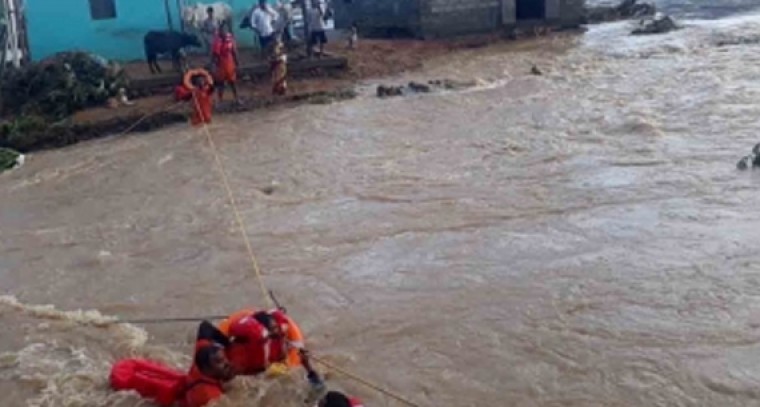 Amaravati, Nov 21 (IANS) Several trains were cancelled or diverted while hundreds of vehicles were stranded on Sunday as the main road and rail routes in Andhra Pradesh remained cut off due to floods.

Railway authorities announced cancellation of 42 trains on the Chennai-Vijayawada grand trunk route. While several other trains were partially cancelled or diverted.

The movement of trains came to a standstill as the railway tracks were submerged in Nellore district, one of the four districts hit by floods.

According to the South Central Railway (SCR), the trains were cancelled due to heavy inflow of water between Nellore - Padugupadu section of Vijayawada Division and Razampet-Nandalur of Guntakal Division.

The floods due to overflowing Somasila reservoir damaged the Chennai-Kolkata National Highway-16 in Nellore district.

The highway had to be closed down for traffic following a heavy breach of road at Padugupadu and also near Nellore town.

The traffic between Nellore and Vijayawada has been suspended, leaving hundreds of vehicles stranded for five kilometers on either side. Officials said traffic on one side was restored in the afternoon.

Vehicles from Tirupati to Srikalhasti were diverted at Tottembedu, leading to huge traffic jam on the national highway.

Police were advising motorists to divert their vehicles through Kadapa, Pamuru and Darsi.

With bus services suspended, hundreds of passengers were stuck in the Nellore bus station.

Hundreds of train and bus passengers were also stranded in the flood-hit Chittoor, Kadapa and Anantapur districts.

Meanwhile, there was no respite for people in temple town of Tirupati as several residential areas remained inundated.

Heavy rains and floods have so far claimed 24 lives in the four districts while 17 people went missing.

Kadapa district has accounted for 13 deaths while seven deaths were reported from Anantapur and four from Chittoor.

According to officials, nearly 24 lakh people were affected by the floods. A total of 1,316 villages were hit by the heavy rains. The rains and floods damaged 1,549 houses.

The authorities evacuated nearly 21,000 people and set up 243 relief camps.

The natural calamity has damaged agriculture and horticulture crops over 6.33 lakh acres.